Many primary schools in the 1940’s had secondary pupils attending and following what were known as “composite courses”. Such was the case with Wyong Public School in Alison Road Wyong.

The school was built on the land known as “Chapman’s Paddock”. This area was Wyong’s first sports ground until Baker Park was opened in the early 1900’s.

From December 1940 Mr Allen was principal of Wyong Public School, and he was the person given the greatest credit for the push towards the creation of a secondary school in Wyong. Gosford High School was the district’s only high school.

Records show that in 1943 there are 33 secondary pupils on average attending the “composite courses” in a wooden building in the grounds of the old Wyong Public School in Alison Road Wyong. The building had come from Ourimbah and the group was called 7th Class.

In accordance with a new system of classification of schools, these “composite courses” were upgraded.

In June 1942 the land was acquired through the efforts of the Member for Wyong, Mr D’Arcy Rose M.L.A for the building of a school. The land was across the road from Mr Rose’s home in Alison Road, and was known locally as Chapman’s Paddock.

Here is the current Wyong Public School in Cutler Drive Wyong, opened in 1979. The old school in Alison Road Wyong has closed, and is now a community asset. The Wyong cenotaph is in its grounds. 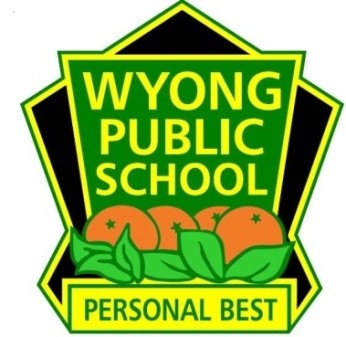 This is the school new badge. Oranges reflect the once thriving citrus industry and the old motto “Truth and Loyalty” has been replaced by “Personal Best”.

November 1, 1943 Mr Allen died. He had been very ill for some time, as he had been gassed in the First World War, but his work was recognised. His wife was asked to attend the official beginning of Wyong Central School on March 4, 1944.

The Principal appointed was Mr Roy Devine. There were 136 secondary students. The Central School had begun with a staff of four, and now there were fifteen. Mr Devine was living in the residence at the primary school in Alison Road, and hoped they would build a residence on the new site. 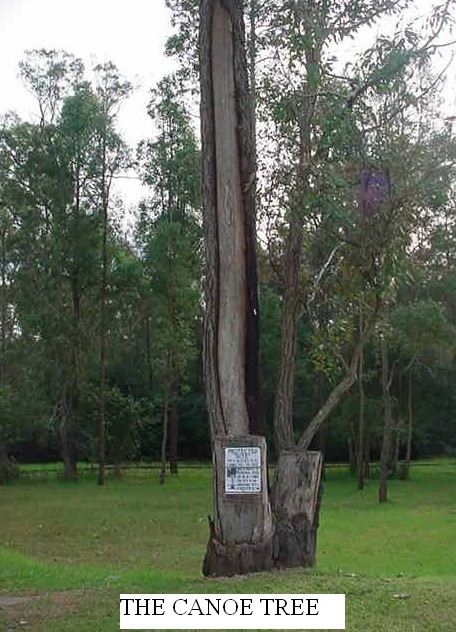 Well before white settlement (around 1823), the Aboriginal peoples of the Wyong area camped in the high school’s locality, as they had fresh water from the Wyong river behind what is now the high school farm plot.

Evidence of Aboriginal occupation is found in the sandstone engraving and groove site located in the farm plot, as well as the canoe tree where the bark was removed to make a boat. We acknowledge the Darkinjung people, and their ongoing connection to the community.

The building of the new school (Blue Block) began on the site known to the locals as “Chapman’s paddock”. The foundation stone was laid on March 22 1946, by the Minister for Education R.G. Heffron. This stone is located near the entrance to our front office in Blue Block. The school building was designed for 350 pupils. Mr Heffron officially opened the school on Friday November 7, 1947. Plaque is on wall at front office entry. Mr Heffron said that much credit was owed to the local Member of Parliament, Mr D’Arcy Rose, and that as long as there was a brick standing in the school, Mr D’Arcy Rose’s name would be associated with it. The school was Mr Rose’s “baby”. Parents and Citizens Association President, Mr Roy Quayle described the school as a wonderful asset to the whole community, and that they should join together to beautify the school grounds and support it.

The “Fairy godmother” of local education was Mr Sam Mc Kimm. As well as being a teacher at Dooralong, Mr Mc KImm was president of the Wyong District Agricultural Association. They too had put the pressure on for the building of a school, and were to make regular grants to help in the purchase of equipment. The association also held the Wyong Show, and the showgrounds (now the racecourse) were where the school athletic carnivals were first held, before the move to Baker Park.

The Central School title began state-wide in 1944, as schools containing both primary and secondary sections, and providing secondary education for children from nearby primary schools.

In 1949 there were 328 pupils enrolled at Wyong Central School.

In February 1950 the school was proclaimed a Junior High School. This was a term used for schools from 1930 to 1976 as a separate secondary school which offered junior secondary education only.

In this year 1950 “The Lakes” school magazine was first published. 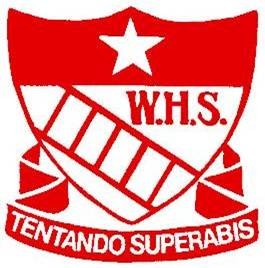 This was the name of the school from 1952. (1952 I was born. My parents had honeymooned in Wyong, and destiny was underway.)

From 1990 the school was designated a “technology” High School, and the staff and community moved for the school to retain its traditional name, which is why we are recognised as Wyong High School – A Technology High School. The School Council, which was formed in 1993, also ratified this name for the school.

The badge came about in 1950 when it was changed from the old Central School badge, which was a white star on red background. The design was chosen from 1949 to 1952 by an art teacher, Mr Jack Walker-Smith who would spend his whole career at Wyong High. Mr Walker-Smith sadly passed away in 2014, the school’s 70th anniversary year.

The rungs of the ladder are the years (or forms) from the days when there were only five years at secondary school. The ladder moves upwards into the heavens, depicted on the badge by the old white star.

The ladder symbolised the motto of the Central School.

….. by striving to attain great heights, you will achieve/succeed.

In the 1990’s this was interpreted as

…. by experimenting, you will achieve your goals.

PRINCIPALS (at one time referred to as Headmasters)

Some of the Deputy Principals you may remember:

For further reading please download and read the Wyong High School History. It contains a lot of very interesting information.

Return to top of page

We would like to pay our respects and acknowledge the traditional custodians of the land and also pay respect to Elders both past and present.

Copyright for this website is owned by the State of New South Wales through the Department of Education. For more information go to http://www.dec.nsw.gov.au/footer/copyright.